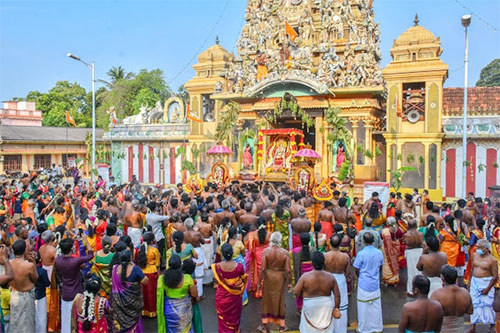 Hundreds of Hindu devotees attending the Vel cart Ceremony of the Ammachchi Ambal Kovil at Vannerpannei in Jaffna on Sunday (25). Pic by Dinasena Rathugamage

Jaffna health authorities have commenced investigating a complaint that a Vel Cart festival with the participation of hundreds of Hindu devotees was held by the Ammachchi Ambal Kovil at Vannerpannei in Jaffna on Sunday (25) in violatino of the health regulations in place to curb the pandemic.

Public Health officials have received complaints from the general public about the kovil officials and legal action under the quarantine act would be taken against those responsible for the violation.