The legend that was Tom Deen had its genesis on the playing fields of St. Anthony’s College Kandy, when he first attended cricket practice for the Under 12 team. Thus began a fairy tale when in no time this promising youngster graduated to the Under 14 team before one could say “How’s that?” in cricketing parlance ! Following this meteoric rise, he was called for practice for the Under 16 side. You guessed correctly……he had hardly taken his middle at the batting crease in the Under 16 team, when he received the call to attend practices for the first eleven side. And there the tremendous potential of this legend came to life when the powers that be soon realized they had a fast bowler the likes of which had not been seen at St.Anthony’s for a long time. At the other end was his partner Saliya Doranegama. They were a formidable pair. Like the Lone Ranger and Tonto, Tom Deen and his bowling partner Saliya Doranegama blazed a trail of glory on the green turf , earning the reputation as being the fastest opening bowlers in schools cricket, hurling down the red ball like a weapon of mass destruction making life very uncomfortable for batsmen. Sports journalists writing in the national newspapers at the time had some colourful adjectives paying tribute to their prowess with the ball, using phrases like ” Deen the destroyer”, “Terrors of the turf “, ” A batsman’s worst nightmare” etc….. In the ‘Big Match’ of 1953 against Trinity college, Deen won the prestigious “Eagle” for his haul of eleven wickets.

Apart from his tearaway reputation as a bowler, Deen could swing a mean bat to destroy any bowling attack ! The Anthonian – Josephian encounter of 1954 played at Darley Road

Maradana, is one example of his wizadry with the willow.  That particular year, St. Anthony’s had the reputation of having one of the strongest batting side in schools, and when the team travelled to Colombo for this game the sports page of “The Ceylon Daily News” headlined its lead story with “Batting machine comes to Colombo “.  The crowds that congregated at Darley road to witness this game were in for a special treat that would live in the collective memory of cricket fans down the ages. When it was Deen’s turn to bat, an old Josephian told me in later years that his walk to the wicket was greeted with eager anticipation because his reputation as a hitter of the ball preceeded him. They did not have to wait long and were entertained to a batting bonanza which sent them into raptures ! Deen cut loose with some sixers which are remembered to this day even by old Josephians as one of the most memorable batting displays ever witnessed on that ground. One old Josephian years later described this batting fiesta to me. 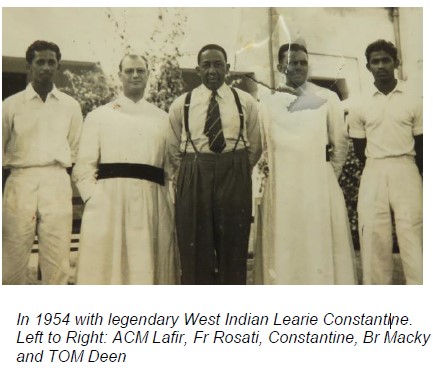 The first six cleared the Bonjean Tower, a feat unequalled to this day. The second cleared the ground and landed in a bicycle repair shop in Darley Road. By now the crowds went berserk ! The third landed in the Home for the Aged at the other end of the ground. The fourth almost cleared the Bonjean tower again and by this time the reaction of the crowd was akin to the spectators in a Roman arena witnessing a gladiatorial contest ! And Deen did not disappoint. The next six landed smack in the middle of Darley Road causing a minor traffic disruption. When he was finally out for 61, the authorities had a difficult time restraining the enthusiastic crowds who wanted to carry him shoulder high back to the pavilion !!

Those were the days when mobile phones were unheard of. When a match was played in Colombo, the only means of obtaining information about the game was by using the telephone in the College office. I was a ten year old hanging about the terraces with some friends when Father Leo Nanayakkare asked Solomon the peon to telephone St.Josephs and obtain the score. Solomon complied and came running out of the office in a state of high excitement telling Father Leo  –  “Shix   –  Shix  –  Shix –  Deen hitting shix

– shix !”  and nearly collapsing in a heap !! A bewildered Father Leo then telephoned St.Josephs College himself and then broke the sensational news about Deen’s sixers to an excited group of students who had gathered nearby. This was the talking point for the rest of the day and as far as memories are concerned, now belong in the receptacle of Anthonian sporting history. After leaving college, Deen played cricket for the Moors Sports Club, representing the club in the Sara Trophy tournament. 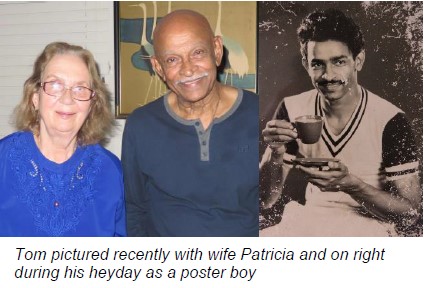 But Deen had other strings to his bow. The fact that he was a soccer superstar sometimes gets lost in the mix when one exults on his cricket career. He represented college in soccer

playing center forward, and dazzled the crowds with his fancy footwork. After leaving college he joined the premier football club in the country, the Saunders Football Club and soon became the cynosure of all eyes as a spell binding center forward. Everything in his sporting life happened very quickly, because the next rung up the sporting ladder was when he was chosen to play for the national team. This involved extensive overseas travel which took him to China, Burma, Pakistan, Malaysia, South Korea and Russia. In Russia he was awarded the medal for the “Best Player of the Match” after a game in Tashkent. When I was a student in Standard two, my class teacher was Mrs.Stevens, the mother of another Anthonian cricketing ‘great’, Ronnie Stevens. I remember she taught us a poem in the English class titled “Grasshopper Green” the first verse of which was:

“Grasshopper Green is a comical chap, he lives on the best of fare.

A mantle of green and a comical cap, these are his Summer’s ware….”

Grasshopper Green may have been a comical chap, but the “Grasshoppers Soccer Team” from Switzerland which toured Ceylon in the late fifties were anything but comical. They were the best team in Switzerland and to use military parlance, “battle hardened veterans” who had played against some of the leading teams in Europe where soccer was king. They  were on an Asian tour which included playing a match in Ceylon. With many talented players in the national team, Ceylon faced their rivals with gallantry  –  it was akin to defending the Alamo !  We lost this game, but football fans remember the match for one scintillating moment . –  the magic goal scored by Tom Deen. It was not a goal scored

from an area in the vicinity of the goalpost, or one scored by a last minute tap when the goalie was not agile enough or too slow off the mark. This goal was scored from the center of the ground. Deen gave it all he got, and from the second the ball left his boot it morphed into a supersonic meteorite, which rocketed past both full backs and the goalkeeper to safely find the nets. It was the only goal scored by the national side, but one which sealed Deen’s reputation as a star center forward. In appreciation of this feat, the Captain of the

Swiss Grasshopper’s presented him with a pair of golden boots to signify his esteem, and that of the team. It was singular honour and well deserved too. Deen also played soccer for Nestle’s, the firm where he was employed.

The great Sir Learie Constantine visited Ceylon when Deen was still a schoolboy. He conducted a coaching camp in Kandy and was so impressed with Deen’s talent that after returning to England he made the necessary arrangements for Deen to visit the UK after he had completed his education to further his cricket career. Sadly, this did not eventuate and one can only speculate where cricket would have taken him had he graced the playing fields of England. In Australia he was actively involved as a Director of the junior cricketers,

a role in which he was responsible for the advancement of some promising youngsters like David Warner when he was just nine years of age. His services to cricket earned him lifetime membership of the Waverley Cricket Club in 2007 in the distinguished company of a former Prime Minister, Mr.Malcolm Turnbull.  The most endearing feature of this sports career is that through it all, Deen was a shining star of humility at the height of his fame, and remained a true sportsman and a gentleman  –  a trait  which endures to this day.

Sportsmen of today who sadly make the news for all the wrong reasons, please take note ! Quoting the old proverb, “He walked with Kings but never lost the common touch”, walking in fields of gold, he brought glory to St.Anthony’s College and to himself, but kept it simple, with the human element deeply embedded in his psyche. He is a living treasure, an inspiration, and a role model for role models. We are proud of you Tom. Thank you for the memories. 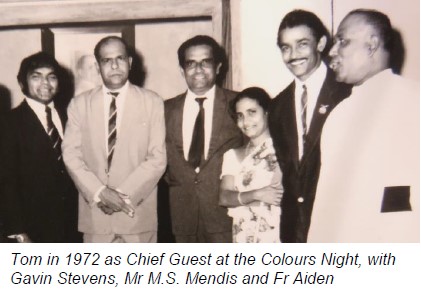 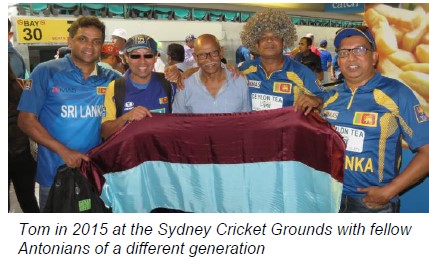 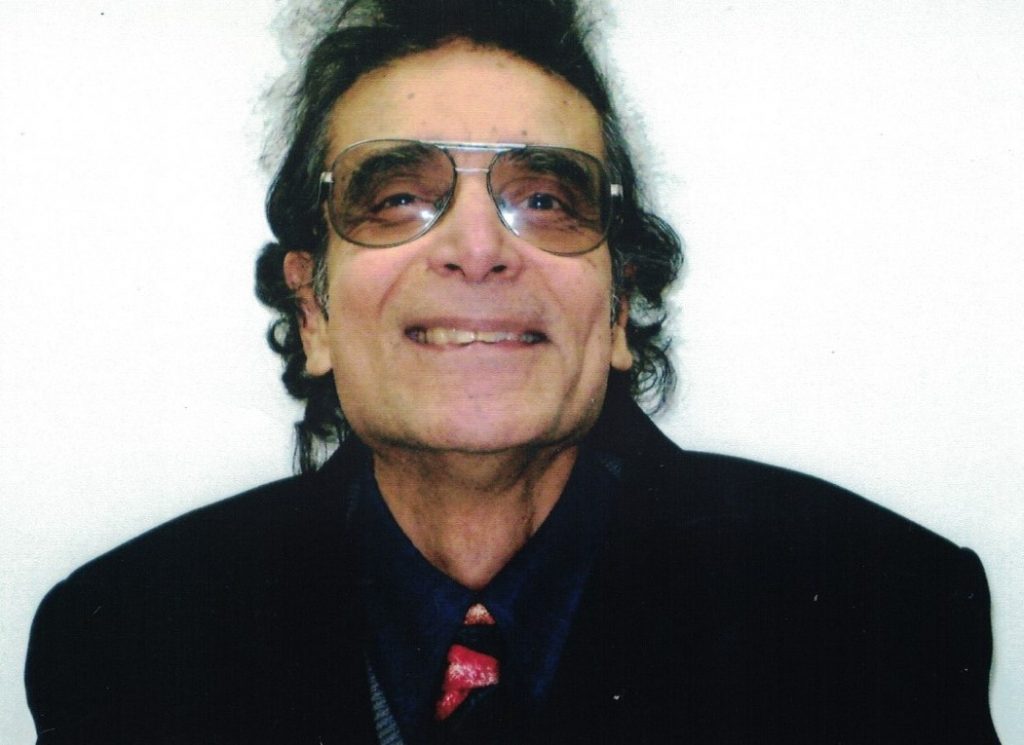