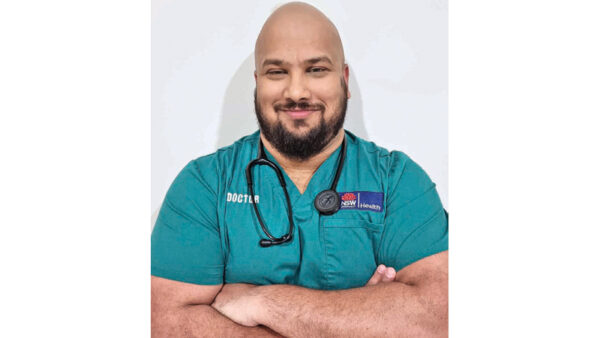 A sportsman to make the National representation needs the all-important exposure at the competitive level which is the club level. But there are some rare instances where they reach the pinnacle while at school without any experience in between. Doctor Athula Lakshman Dissanayake was one of them who handled the oval shaped ball at school and went on to don the National jersey without any club rugby experience at the age of 17 years

Lakshman was born in 1985 and hails from a sports loving family. His grandfather was late S.A. Dissanayake was a former Inspector General of Police and was a rugby player who represented Royal College, Colombo in 1931/32 season captaining the first XV team.

His late father Lakdassa better known as ‘Laki was also a surgeon by profession and was another fine product of Royal who donned the rugby jersey from 1962 to 1964 who, was well known for his drop goals at the 1964 Bradby Shield match at Nittawela. Lakdasa had put over three penalties from 45 metres out with drop kicks and made a spectacular conversion to the solitary try scored by Royal with another drop kick to give them a 14-6 win after Trinity skipper Mohan Sahayam had scored a try early in the game to give Trinity a 3-0 lead He served as a Surgeon Commodore with the Sri Lanka Navy and had a tragic death while trying to save the life of a friends son in the sea off Bentota in January 1990. His mother was Cynthia Amarangani, a housewife, who was instrumental in grooming him after his father’s demise at the age of four.

With a generation educated from Royal, Lakshman too was enrolled with Royal College. With his build and family influence, he was very fond of engaging in sports from his childhood. He was associated in Athletics, Cricket and Rugby at junior level at school. But rugby took a prominent place in his sporting career. He began his rugby career when he was 11yers old. The exposure he gained in athletics helped him immensely in rugby, especially the speed and endurance to secure spots with his ‘Alma Mater’.

He occupied the wing three quarter’s berth from the time he started playing for school. He captained the Royal under-13 team to record their first ever All Island Cup Championship in 1998 later played in all age groups until the first XV team. He remained as a permanent member for four years in first XV from 2001to 2004, where they lost only two matches in his tenure of four years with the senior teams. He vice captained the first XV team in 2003 under the captaincy of Rajith Jayasundara and led them in 2004 winning the Bradby by (41-6 and 10 nil) while scoring in both legs. They also won the Michael Gunaratne trophy by beating the Thomians 18-8 and and Milroy Fernando trophy by edging out Isipathana 7-5 while playing as a wing three quarter. He was also part of the record-breaking team in 2002, which won the Bradby with an aggregate of 83-nil (39-0 and 44-0) For his belligerent performance, he was awarded the prestigious ‘Royal Crown’ in 2002 followed by double colours at Royal in Athletics and Rugby. He rugby basics were instilled by Fazly Razik, Niroshan Jayasinghe and Summa Navaratnam. He also was awarded the ‘Maalin Dias Sports Scholarship’ for excelling in multiple junior sports in 1998. In addition to rugby, he holds the record for 100 metres at the Junior Tarbet Shield championship. He represented the Sri Lanka under-19 rugby team as a wing three quarter in the first year and as a flanker/number 8 in the second year. He vice captained the Sri Lanka under-19 Rugby team at the junior Asiad in 2002 in Hong Kong and in 2003 in Malaysia. Played with the likes of Rajith who captained both years, Fazil Marija, Mohamed Sheriff,Shehab Bahudeen , Namal Rajapaksa and Mohamed Rinaz.

Unlike the other players, he had a very short stint with CR and FC in club rugby playing in the under-24 tournament. He received his National call in 2002 He was a part of the Sri Lanka sevens Rugby pool that year. He was also one of the youngest to represent Sri Lanka Rugby team at the age

of 17 along with Rajith Jayasundara making his debut in Sri Lanka’s match against Korea at the Asian Games in Busan, Korea in 2002. He was fortunate enough to play with the likes of Harris Omar(captain), Pavithra Fernando Savantha De Saram and Indrajith Bandaranayaka. The coaches whom he played under are Tavitha Thulagesi (Laga), Nizam Jamaldeen, Late George Simpkin and C.P. Abyegunawardana.

He then decided to follow in his father’s footsteps and as a promise to his mother, who passed away when he was 28 years old, after leaving school decided to pursue a career in Medicine and was unable to continue rugby from there onwards. He worked in Sri Lanka as a Doctor both in the Private and Government sectors. Currently he is working as an Emergency Medicine doctor in New South Wales, Australia. He lives in Campbell town in NSW, Australia with wife Manoshi Wickramasinghe who is also working as an Emergency Medicine Doctor who was blessed with a baby recently.