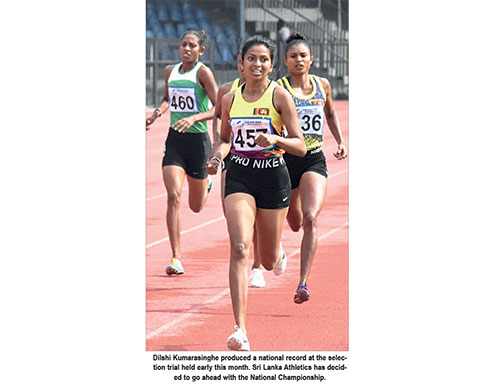 The governing body of track and field decided to conduct the two major national events at a meeting held on Wednesday.

“We have considered alternatives in the event of an escalation of Covid 19 cases. In case of an increase in cases of Covid 19 we will conduct field events and track events separately at two venues. We have also considered the option of increasing the number of days and reducing the number of events per day to minimize the number of athletes per day at the venue,” Palitha Fernando, who was re-elected as the president at the weekend’s AGM told The Island.

The National Championship is vital for athletes aspiring to improve their world rankings in a bid to qualify for the postponed Tokyo Olympics.

With no other international events happening in the near future the National Championship will be the final opportunity for a number of athletes aspiring to achieve entry standards for the Olympics.

Country’s track and field athletes did not have enough competitions to take part due to the outbreak of Covid 19 last year. Sri Lanka Athletics took steps to conduct last year’s National Championship in December in a bid to support its athletes and also conducted a Selection Trial early this month.

At least one National record was established at the Selection Trial held at the Sugathadasa Stadium. Sri Lanka Army’s Dilshi Kumarasinghe produced a timing of two minutes and 2.55 seconds to create a new national record in the women’s 800 metres.