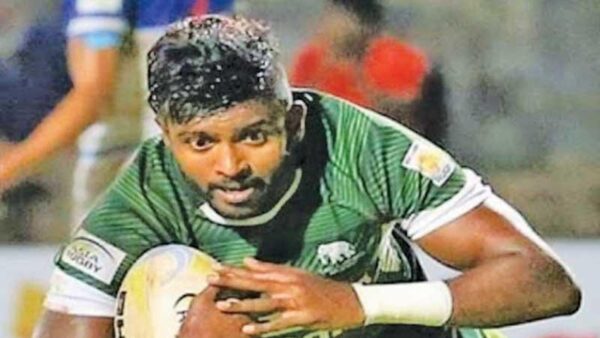 Danush Dayan: Captain on a crusade to save his team

Ball carriers and water boys clueless about rugby are dictating terms and working on the blind side as Sri Lanka Rugby keeps passing the ball:

Rugby players in Sri Lanka have taken to social media denouncing what they call the failure to recommence the once popular spectator sport that had ample breathing space in the first four months of the year.

Their reaction comes barely a week after rugby officials took pride in installing themselves with media coverage for a second one-year term despite them not being able to witness a single match during their first one-year term.

“Please give us the chance to play rugby for our country,” warned the captain of the Sri Lanka Sevens team Danush Dayan.

Several other players told the Sunday Observer that it could take up to a year for them to regain what they called the “rugby spirit” in them if the game ever recommences.

“We are being dictated to by people not at Sri Lanka Rugby but in the National Sports Council (NSC) who have never held a rugby ball in their lives,” said one of them who pleaded that he not be named as he feared repercussions.

He said one member in the policy making NSC had even gone to an outrageous extent of recommending that a mere Rs.20,000 be paid to players after Sri Lanka Rugby (SLR) submitted to the Sports Ministry a budget grading the players to an encouraging level along with a High Performance blueprint.

“I understand the frustration of the players. We have been talking to the Sports Ministry and conveying to them all our issues and we are still waiting for something positive. It is not the Minister but the lower rankers who are pontificating,” said Sri Lanka Rugby president Rizly Illyas.

But pressed for an answer on whether Sri Lanka’s rugby players are treated like beggars by the powers that be, Illyas said: “It would have been a different story if we had some of our past players in the National Sports Council who know what rugby is.”

Rugby was the only popular spectator sport in Sri Lanka that did not get off the ground during the pandemic while football, cricket and athletics had their day.

It was also the only sport that had an opening to relaunch by way of the inter club Sevens in the months from January to April before the so-called third wave of the coronavirus.

But behind-the-scene bungling and not the pandemic forced its cancellation after one club, Air Force, who were entrusted with organising the matches to mark their 70th anniversary walked away for reasons other than sport followed by the sponsor pulling out and SLR not able to play even a friendly match for the record.

To date no one has been held responsible for the muck-up of the inter club Sevens as the protagonists became antagonists.

The silence of the Sports Ministry on the matter was baffling to say the least while the SLR Council has probably the largest number of inner-circle members than any other sports body in the country numbering 14, one less than a playing team.