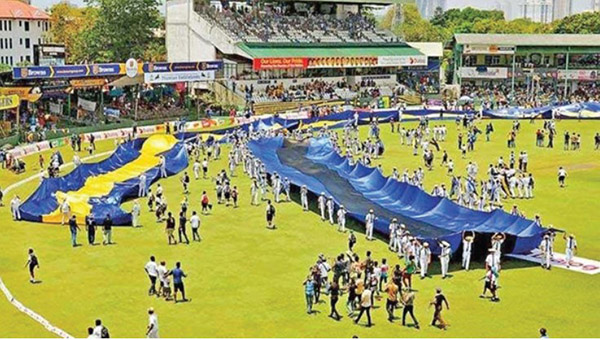 This year’s Royal-Thomian will be played in Hambantota

This year’s Royal-Thomian Battle of the Blues cricket encounter will be played on May 6, 7 and 8 in Hambantota.

But for the first time in its 142-year-old history, this year’s Big Match will be a closed door affair with the die-hard spectators who will only be able to catch the action via live television coverage.

This will be the first time that it is being played outside Colombo as the Mahinda Rajapaksa International Cricket Stadium in Sooriyawewa becomes the ninth venue to host the prestigious encounter.

The Royal-Thomian cricket encounter has always been the prime cricket match not only among schools in Sri Lanka but the world over as the only uninterrupted Inter-School cricket match which goes back to 1879.

There had been one other cricket match in the world which is a couple of years old but that too was stopped during the World Wars. Even the first ever Test match in the world was played just two years before the inaugural match between Royal and S. Thomas’ in 1877 – between England and Australia at the Melbourne Cricket Ground (MCG).

But the Battle of the Blues series between Royal and S. Thomas’ will go down in history that a strong bond, even the two World Wars, could not stop.

Similarly, even the current COVID-19 pandemic which stopped almost every form of human activity has not been able to disrupt the 142-year-old rich Royal-Thomian traditions.

It was after the final day of last year’s Royal-Thomian Big Match that the first wave of COVID-19 badly hit Sri Lanka. Amidst the midway through the second wave, Royal-Thomian is now looking forward to maintaining its unbroken sequence even during the COVID-19 threat.

The Battle of the Blues now comes to Hambantota for the first time in its 142 years as the Mahinda Rajapaksa Cricket Stadium was earlier in the plan to host the match from April 8 to 10 behind closed doors.

But the joint organisers now plan to put it off by a month and to play the three-day match from May 6.

S. Thomas’ proposed to play it in June or July but agreed to play in May before the GCE Advanced Level examination.

There will be live local television coverage of the three-day affair, similar to the recently conducted Lanka Premier League T20.

Apart from the usual live webcast, negotiations are underway to give live TV global coverage for the benefit of the former Royalisits and Thomians living in the Americas, European and Australasia regions.

When the COVID-19 pandemic first hit Sri Lanka badly in mid-March, last year’s Battle of the Blues was just concluded. Most of the First X1 matches of the 2019/20 season were completed by then.

It was the first Inter-School match to be played after 11 months due to the COVID-19 situation. It gave confidence to school cricket that it could still bounce back under difficult conditions.

Pavan Ratnayake (179) of Mahanama became the first centurion for the season while his teammate Vinuka Rubasinghe (109) soon joined the club as Mahanama made a healthy 385 for six declared. In reply, the Antonians made 251 for four with M. Kamel (85) narrowly missing his first century for the season.

It was nice to see school cricket finally becoming a reality after the COVID-19 ruined it for almost a year.

The traditional two-day matches will not be counted as tournament matches this year. However, schools are permitted to play their friendly matches, provided they get the green light from the regional health authorities.

There will only be one-day limited over tournaments conducted by the schools cricket governing body.

The Secretary of the Sri Lanka Schools Cricket Association (SLCSA) J. A. K. S. Indrajith said they earlier got the approval from the Education Ministry to begin the new 2020-2021 Under-19 cricket season from March 15.

It will also be the date for the Western Province schools reopening after the postponed GCE Ordinary Level examination.

The SLSCA Secretary said now that they have got the final green light from the local health authorities a team will play five qualifying round matches each and that those matches will be played behind closed doors.

Asked whether the final round matches too would not entertain spectators, Indrajith said it will be too early to make a decision. He said it is too early to talk about that. If they get approval from the health authorities, then they could open the venue to the cricket loving public.

But as it is, they will play the matches behind closed doors to ensure the health of all parties.

Prior to the preliminary round matches, the host team will inform public health inspectors of the area.

Royal, Trinity, D. S. Senanayake, De Mazenod, Wesley and Gurukula MV have been drawn in Division 1 Group ‘A’ section ‘X’ in the Inter-school Under-19 Limited Over Tournament to be played from next month.

A further 36 school teams will battle it out in the Division 1 Tire ‘B’ Tournament drawn under three groups A, B and C. There will be 72 teams competing in the Under-19 Division 1 and Division 11 Tournaments.

The SLSCA will conduct the Under-19 tournament from March 15 to May 2. There will not be any two-day tournament matches.

The one-day limited over tournaments will be conducted under two divisions with each team drawn to play five qualifying round league matches.

The teams will have some 47 days to complete their matches including the finals by May 2. In between, there will be a few days break after the first round for the Sinhala and Tamil New Year.

After the qualifying league round, eight teams each will be selected to play in the final rounds from the quarter-final onwards. The maximum number of tournament matches a team has to honour is eight, including the five qualifying round games.

Meanwhile, the 43rd Observer-Mobitel School Cricketers of the Year will be launched with the most popular contests with the commencement of the 2020-21 Inter-School season.

However, the postponed 42nd Observer-Mobitel School Cricketers of the Year Awards Ceremony will be held no sooner the organisers get the greenlight from the health authorities.

The Observer-Mobitel Schoolboy Cricketer of the Year contest has gone from strength to strength, especially after the Sunday Observer teamed up with Sri Lanka Telecom Mobitel.

The SLT Mobitel added more power and energy to the Observer School Cricketers of the Year show 13 years ago, thereby improving the quality of the event drastically.

Apart from increasing the volumes of rich cash awards to the winning schoolboy and schoolgirl cricketers, the coaches and masters in charge who put in a lot of effort behind the scenes have been rewarded.

Chairman of Sri Lanka Telecom and SLT Mobitel, Rohan Fernando has given all possible assistance to the Mega Show which will march forward with more power and strength.

The SLT Mobitel is sponsoring the show for the 14th successive year, at a time when the company is heading towards new horizons under the dynamic leadership of SLT and Mobitel and Fernando, the former Thomian ace rower.

The management of Lake House has strongly backed the Mega Show. Current Chairman, W. Dayaratne and the team of Board of Directors – Dharma Sri Kariyawasam (Editorial), Rakhitha Abeygunawardhana (Legal and Administration), Janaka Ranatunga (Finance) and Canishka Witharana (Operations) have always been a tower of strength to take the Observer-Mobitel School Cricketers of the Year forward.