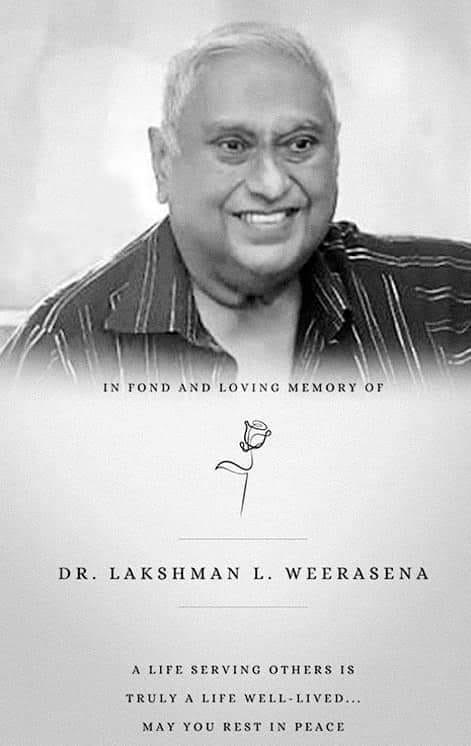 It is with much sadness we learn the demise of Dr. Lakshman Weerasena today (23 Nov). As our former cricket captain Bernard Wijetunge says, “A Life Serving Others is truly a Life Well-Lived”.

Lakshman was an all-round brilliant student at his alma mater St. Peter’s College. Some of his classmates in the higher classes include Prof. Willie Mendis, Kevin Ruberu (Australia), Rontjen Perera (USA), Basil Gurusinghe (Canada), the late Dr. Lucian Perera, and many others. In sports, Lakshman was overshadowed by his older brother Ranjit Weerasena who shone in the ‘throws’ at college meets, group meets and Public Schools Championships. Lakshman also did the ‘throws’ while in school. Lakshman entered medical college from St. Peter’s and built a roaring private practice in Colombo.

Recipient of Deshabandu Award in 2017

A renowned social and community worker, Dr. Lakshman Lucien de Silva Weerasena, a medical practitioner with a wide experience of over 45 years in the field was honoured with the Deshabandu Award at the 2017 National Award ceremony. It was held under the patronage of President Maithripala Sirisena at the Nelum Pokuna theatre, Colombo.

There are volumes that can be written about this friendly personality who had a huge public persona but remained a proud Peterite. Funeral details are not known at time of writing.

Life is impermanent but death is permanent. Eternal rest grant unto Dr. Lakshman, O Lord, and let Your perpetual light shine upon him. May his soul and the souls of all the faithful departed rest in peace!