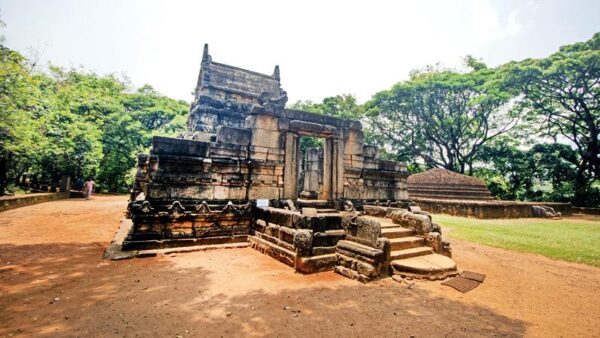 We were on the exact middle of Sri Lanka, the centrepoint of the island to visit the Nalanda gedige where Hindu and Buddhist art met in lime and stone over a thousand years ago. 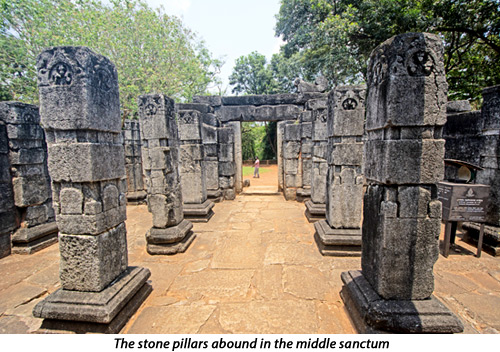 Although not included in the tourist map, it’s worth taking a diversion on your way to Dambulla from Kandy to visit this lesser known solitary monolith shrine. The temple is located 20 kms North of Matale and about one kilometre east of the main Jaffna-Kandy A-9 road.

Having parked our vehicle at the spacious car park, we walked about 100 metres under the shady tree canopy to visit the solitary shrine. It is also one of the few places in Sri Lanka where you can visit a historically significant site freely. The temple shrine is managed by the Archaeological department of Sri Lanka.

On an elevated land, surrounded by a picturesque reservoir, is the quaint Buddhist temple where Hindu sculpture and Buddhist art found fusion to create a unique masterpiece of genius. There are no statues of gods in evidence except for one in a ruined state and the only image extent is a restored Buddha statue. 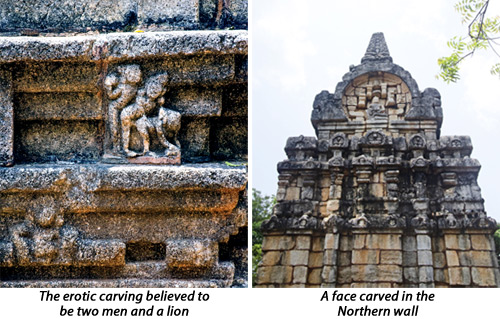 Nalanda Gedige is a monolithic structure vaulted from brick where you could see an infusion of Hundu and Buddhist architectural elements. Gedige is a word derived from Pali, which roughly means a brick house, which is used to shelter images. The architectural uniqueness of Nalanda Gedige is intriguing. It has a charm of its own that should be witnessed by anyone who has a curiosity for mystery and history.

The promenade that leads you to the shrine is shrouded with foliage and trees. The temple site is nestled in a secluded arboreal village, surrounded by a reservoir. The stone pillars on either side of the path will lead you to the sight of a massive intricate stone carvings. Before you begin your short excursion, make sure to visit the museum located at the car park. A guide will provide an explanation of the carvings and brahmi inscriptions on rectangular stone slabs.

Nalanda Gedige was in the forest for centuries until it was finally unearthed by first Archaeological Commissioner in Ceylon, H.P.C. Bell in 1893. Once the surface ornaments and sculptures were dug around, the temple was reassembled from its remnants in 1975.

The shrine was originally located in a lower level terrace of mushy paddy fields and due to the Mahaweli river hydroelectricity project – Bowatenna reservoir, the site faced the threat of a submerge. In 1980, Nalanda Gedige was dismantled, moved and meticulously reconstructed on a higher ground. The construction is ambiguously dated by many archaeologists. According to some associated inscriptional evidence of 8-9th century, former Archaeological Commissioner Prof. Senerath Paranavitana assigned this temple to late Pallava style of about 8th century. It is believed that the site was fortified by King Parakramabahu in the second half of the 12th century and endowed with a monastery between the 8th and 10th century.

Presumably built in 11th century AD, the Gedige is considered to have been a sanctuary dedicated to Mahayana chapter with pronounced tantric learnings. At first glance, the temple bears much resemblance to a Hindu shrine. It has very little in common with classic Sinhala Buddhist architecture. 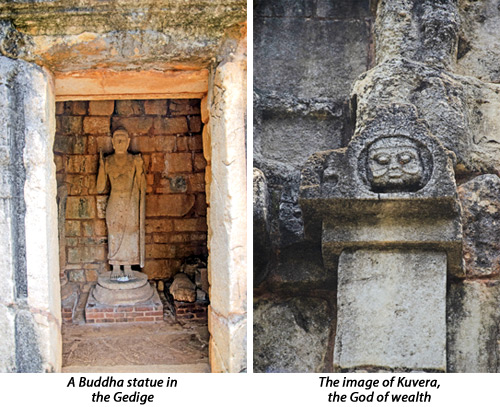 The Chola reigned over ancient Sri Lanka for three generations. Stone temples in Dravidian design proliferated in Polonnaruwa during this period. Artists emulated structures from solid brick mass to construct the finest monastic complexes. They embellished the façades and stone columns with shaivite and vaishnavite details. Just as any South Indian shrine, you could see Hindu motifs and deities such as Ganesh, Lakshmi and Kuvera adorning Nalanda Gedige’s image house. The image shrine houses a standing Buddha, a statue of Ganesh and a Bodhisattva figure.

The carving of the God of wealth, Kuvera, appears to be squatting on a lotus plinth, on the south side of the tympanum over the sanctuary. This is the only image of Kuvera to be found in Sri Lanka.

Art is regarded as a part of Hindu tradition of treating kama (sexual desire). Hence, we could assume that this symbolism was embedded in the carvings of Nalanda Gedige under the strong South Indian influence.