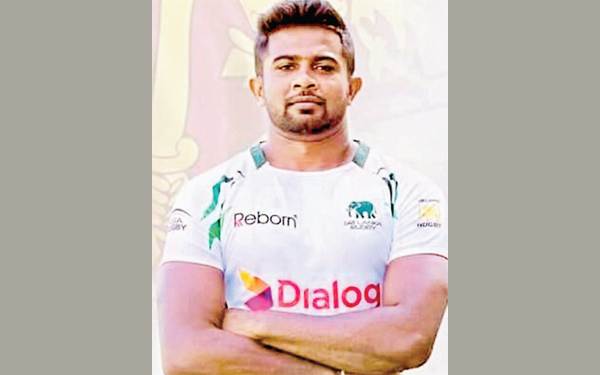 A person to reach great heights in any endeavor including sports will need the influence of someone to boost his morale. Similarly, in the game of rugby some players were motivated by their friends and families to take up handling the oval shaped ball, to transform them to a prominent player, enabling them to don the National jersey with the highest recognition.

Fly half Chanaka Chandimal was one of them who was motivated by one of his friends to take upto rugby to become the cynosure of all eyes by representing the Sri Lanka team . Chanaka Chandimal had a nickname called ‘Meeya’ and was born in 1988 in Kandy. His father is K. G. Piyasena working at Schokmans and Samarawickrama Auctioneers and mother is Ranjani Premalatha, a housewife. He has two siblings Niroshan and Madhubashini Kumari. He schooled at Vidyartha College, Kandy from 1993 to 2007 completing his academic career from primary to higher education. He was a sports fanatic from his younger days and from 1998 to 2000, was a member of the college football team. In addition, he participated in athletics competing in long jump and was also involved in scouting during his school career. In 2000, one of his good friends, Hasintha Lakshan suggested him to join the college rugger team which made him concentrate more on rugby than football. He insisted him to attend practices which subsequently enabled him to secure a position in the college rugby team. Since then he has continued playing rugby up to date. He started playing Rugby from under-13 age group team at school when he was just 11 years old. He played for the first XV team in 2003 and surged ahead to lock horns with the under-19 Sri Lanka team touring Brunei in 2007.

After his school career, from 2007 to 2011, he joined the Air Force and started his club rugby career. In 2008, they became the club sevens runners up coached by Dhammika Medagedra and captained by Suranga Arunashantha.

He was awarded “The Best Player” in that tournament which was an unforgettable memory in his life. While he was excelling there in 2009, he received the National team call and established a regular position and played in the Asian Rugby Championship held in Dubai the same year. From 2010, he participated in several Asian Five Nations Tournaments in Singapore and won the Championship with the National team. He also played in the Commonwealth Games in India in 2010, played in Asian Games Sevens in China coached by late George Simpkin and Imthi Marikkar. He was in the Sri Lankan team which won the Carlton Sevens ‘Bowl Championship’ held in Sri Lanka. In 2011, he participated at the Asian Five Nations Tournament involving Hong Kong, Japan, Kazakhstan and UAE. In 2011 and 2012, he participated at the Carlton Super Sevens with the North Western Blacks captained by him winning the Championship in 2012.

He then moved to Navy Sport Club in 2012 and scrummed down for them from 2012 to 2018. They became the Clifford Cup champions in 2013 coached by Leonard de Zilva assisted by Mothilal Jayathilaka where the team was captained by Rohitha Rajapaksa. In 2014, once again participated at Asian Five Nations Tournament involving Japan, Korea, Hong Kong and Philippines. In 2016, he played in Rugby Super Sevens Tournament representing the team ‘Ezy Wolves’. Navy went to win the Western Province Sevens championship coached by Mothilal Jayathilaka and captained by him.

He was honoured by Vidyartha College being awarded the ‘Blue Eagle’ for his rugby achievements.

He once again participated in the Asian Five Nations Championship in Malaysia. He further played in the Brunei sevens representing the National team involving Malaysia, Korea, Hong Kong and Philippines. He was also a member of the Navy team which won the Dialog Club Sevens in 2017. In 2018 he crossed over to CR and FC and played for them until 2020. In 2018 they, won the Dialog Club Sevens Championship and became the runner-up in 2019 in the same tournament.

From 2009 to 2018 played for the Access team with his employer and in 2009 they won the Mercantile sevens tournament. There they won two cup and one plate championships while becoming runners up on six occasions. In the 2020/21 season, he moved to join Dialog to play in the Mercantile Rugby Tournament.

While as a player in 2016/17, he was recruited to coach the under-18 team as assistant coach with Thurstan College, Colombo and won the Plate Championships. In 2020, he coached the under-13 Isipathana team. He has successfully completed IRB strength and conditioning level-one and he also has completed the IRB coaching course level one and two.

He is married to Lakshika Madurangi, a teacher by profession and has a child Ayush Chanketh.