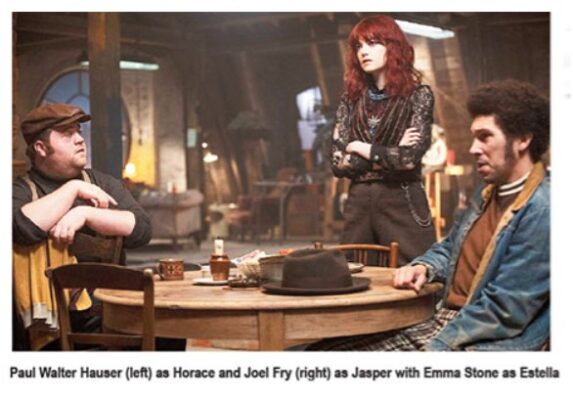 Everyone knows her and simply hearing her name is more than enough to send shivers down the spine. Cruella de Vil was first introduced in the novel ‘The Hundred and One Dalmatians’ by Dodie Smith. The story and the character were later reintroduced as animated renditions in Disney’s 1961 movie. The 1996 live action adaptation of the 101 Dalmatians starred Glenn Close as Cruella and she delivered a truly unhinged performance which drew on the traits of the animated film. The latest film, directed by Craig Gillespie, is the newest addition to the line-up of Disney’s journey to give origin stories to some of their most iconic villains. Comedy-drama ‘Cruella’ marks the third live action film in the 101 Dalmatians franchise. The eponymous role is portrayed by Emma Stone, alongside Emma Thompson, Joel Fry, Paul Walter Hauser, Emily Beecham, Kirby Howell-Baptiste, and Mark Strong.

Set in London in the 1970s during the emergence of the punk scene, the film follows a young Estella, an aspiring fashion designer. The film unfolds as it explores her childhood and adulthood, everything from the tragedies to the delights that come together to form the final product, Cruella De Vil. Born with the classic black and white ombré hairdo, Estella was extraordinary, intelligent and her love for fashion was clear from the get-go. Her strongest traits were often seen as ‘rebellious’ and much of her younger years are marked by her mother Catherine, a kind and gentle woman, constantly encouraging Estella to try and ‘fit in’ with everyone else around. Following a series of unfortunate events, Estella and her trusty companion Buddy (a dog, yes surprisingly she likes dogs) arrive in London, get into a life of thieving with co-conspirators Jasper and Horace who become her family of sorts. Her career as a fashion designer begins as an apprentice under the tutelage of Baroness von Hellman, of the House of Baroness. As she explores the world of fashion, new revelations of her past force her to embrace and unleash the bold, confident and cruel alter-ego in her.

Unlike Glenn Close’s rendition of Cruella, which focused more on the puppy-skinning villain angle, Emma Stone’s version is more grounded and rebellious than villainous. Close’s version of Cruella was relentless and malevolent whereas Stone’s version is one created from scratch, meaning she has the potential to edge further and tap into her more scary traits. The origin story gives Cruella the chance to tell her story in her own perspective and on her own terms. Her progress from being the timid Estella, to embracing the Cruella within her isn’t forced or rushed as the story paces quite well and each scene unravels the story with great execution. The all too common ‘bad-parenting’ narrative gives Estella/Cruella the necessary foundation to grow. But the highs and the lows of the characters are seamlessly intertwined with dark humour and strong camp aesthetics, while the witty comebacks, petty revenge schemes, mean one-liners and classic soundtracks all scream ‘it’s more fun being bad’.

However, apart from the enthralling performances of the cast, audiences are drawn to the iconic and flamboyant high fashion of the ‘70s. Fashion is the highlight of the film, because Cruella, although evil, is a brilliant fashion designer. Fashion enthusiasts will see that the Baroness’s aesthetic was loosely inspired by Dior. Emma Thompson’s Baroness has a very snobbish wardrobe, which tells audiences that she is a brilliant but rather old-fashioned designer. The changing character arc of the titular character is evident in her fashion choices. Estella opted to wear clothes that allowed her to fit in and keep her out of trouble, but Cruella’s designs were more bold and striking, and became sharper and more tailored as the character grew. Her clothes speak volumes about her personality and her brilliance as a designer. Cruella’s character also taps into the more modern practice of reusing clothes to make new clothing.

Unfortunately the positive aspects of the film are hindered by bad CGI. In addition, there is also the matter of Cruella’s puppy-killer attribute which doesn’t make an appearance in the film. The original Cruella is portrayed as a puppy-killing monster, but strangely Stone’s Cruella doesn’t actually hate dogs. Many audiences assumed that (SPOILER ALERT) it would be odd for Cruella to have a lifelong grudge against the Dalmatians who killed her mother. The Dalmatians appear throughout the film, and one would think the animals were either testing Cruella’s patience or simply giving her ideas to pursue in the future. However, she has no interest in killing (yet), although she does entertain the idea of making pelts out of the Baroness’s dogs. Perhaps it was Disney’s intent to create a villain people could empathize with or root for. Giving Estella/Cruella a dog for a close companion makes her somewhat likeable, but the growing detachment to those close to her possibly hints at her veering off track and truly embracing the original character that more adult audiences grew up disliking.

Emma Stone as Estella and Cruella is simply enthralling to watch. She completely owns her role and immerses and seamlessly fluctuates herself between the dual personalities driven by unstable emotions. She brings depth to both characters, with one trying hard to fit in and accomplish her dreams while the other is bold, intelligent and is the perfect mask to hide her unbearable pain. Emma Stone plays out Estella’s descent into madness exceptionally. Emma Thompson proves to be a very stylish and brilliant antagonist as well. She is wildly reminiscent of and radiates Meryl Streep’s energy in ‘The Devil Wears Prada’. Stone and Thompson’s on-screen dynamic is simply ecstatic and riveting to watch as the two icons battle it out fashionably. Joel Fry’s Jasper and Paul Walter Hauser’s Horace bring in the comedy (and sanity) element to the film. From Hauser’s Horace always wanting to know everyone’s ‘angle’, to Jasper grounding Cruella’s thoughts reminding her of their odd-ball family, they add a slightly different touch to the film. They aren’t just her henchmen or a couple of sidekicks, to Cruella in the very depths of her mind, they are her only family.

In the end, ‘Cruella’ does make a refreshing origin story, although Disney has largely stuck with the format of the original character and only made slight tweaks. While exploring the world of fashion, the film also touches on themes of family, togetherness and identity, which no one expects when they hear ‘Cruella De Vil’. The film brings in a fresh perspective of the notorious villainess and allows her to justify herself and her identity as a brilliant but crazy fashion designer. ‘Cruella’ makes a strong and powerful entry in the latest film and it’s unlikely she’ll be going away anytime soon. A sequel may be brewing so audiences can expect to see more of ‘Cruella De Vil’ in the future. 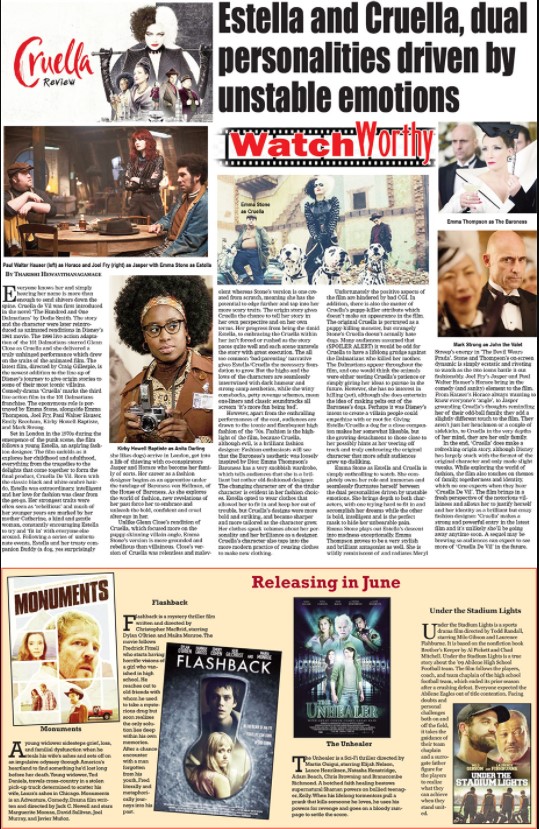