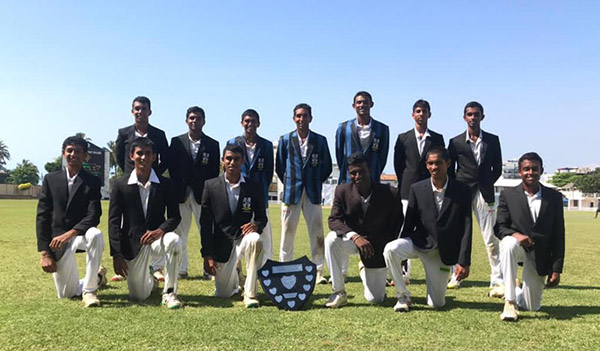 Young Manith Perera playing his maiden 01st XI game came up with a match bag of 11 for 83 dismantling the Johnians, giving STC their 03rd consecutive victory in the series.

St. John’s could only make 61 in their first innings an hour before lunch, after the Thomians decided to declare overnight. T Dinoshan 21 was the only batsman for the visitors who looked solid but threw his wicket away. Manith with his left arm leg spin was the pick with 4 for 23, with the rest of the bowlers sharing the wickets.

Captain Shalin had no hesitation in sending the Johnians back into bat after being 180 runs in the plus. The second essay for the visitors was not easier, as they were 40 for 3 at the lunch, needing another 120 runs to save an innings defeat.

Manith however was in no mood to let the St. John’s batsmen off the hook, taking 7 for 60 and helping complete the win by an innings and 35 runs. In the total of 145, T Dinoshan 20, T Vinojan 34, K Thamilkathir 34 and Y Sageethanan 22 n.o batted well.

The Johnians should be pleased with their first day bowling performance. If their fielding was sharper the match story might have been different. Also, they batted with much more intent in the second innings.

As they journey back home, we wish them well.

S.Thomas’ College won the toss and elected to bat first.