My father was a very easy-going person but led a very principled life.  When it came to honesty and integrity, he was right there on top even at the expense of his family. He mentioned these two traits often to his children.

Talking about cricket, he once asked me and my brother, “If you hit a ball and it goes up to be caught by a fielder, what is your status?”

If you snick a ball and know that you did and if the wicket keeper catches it, what’s your status?”

“If so, why do you look at the umpire to tell you so?”

He went on to say, “if you snick and get caught, you walk back to the pavilion without shamefully waiting for another man (umpire) to tell you that you are out”.

Thanks to my father, I have never looked at the umpire after snicking a catch and am proud of it.

Taking this a bit further, my father was the Advertising Manager of the Ceylon Observer at Lake House, the year I captained Ananda. He was an extremely popular figure among his colleagues and subordinates.

I excelled this year as an all-rounder.  I scored heavily, bowled successfully, and fielded extremely well, holding over ten difficult catches in the gully and at short leg. I was also responsible for three direct hit run outs which were rare at that time.

I have also had the honor of being selected to captain the Ceylon School’s Cricket team for the Robert Senanayake Trophy tournament and against the Hyderabad Blues team that included Hanumant Singh and ML Jaisimha.

My friend Anura de Silva of Nalanda was my vice-captain.

During this time, the results of the Schoolboy Cricketer of the Year results were coming out and was announced as follows:

Sunil Wettimuny the stylish opener was right behind me only because he had scored just a few runs less than what I had got.

I was not too disappointed. Anura in my opinion was the complete cricketer.  That was the official end to my schoolboy cricket career. 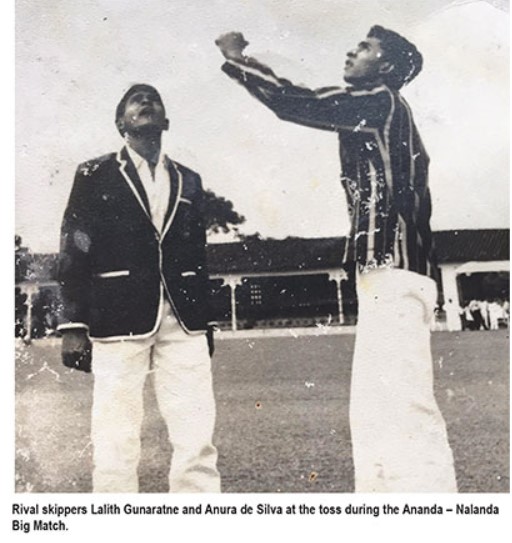 The day I received the much-awaited telegram from the Army stating that I was selected to be enlisted as an Officer Cadet, I went out with my father to buy some items that would be required at Diyatalawa. We stopped for lunch at Parkview Chinese Restaurant.

While enjoying our lunch, my father dropped a mini bombshell.  He started by saying he has something especially important to tell me.

He said that he had made a written appeal to his boss Ranapala Bodinagoda, Chairman of Associated Newspapers, and also spoken to him regarding the Schoolboy Cricketer of the Year program.

He had pleaded with Bodinagoda to speak to the selection panel and persuade them not to select me as the Schoolboy Cricketer of the Year if my name came up to the final few.  He had a valid reason to sacrifice the glory his son would have achieved even for a short while.  I did not say a word but kept on listening to him.

He said, “Son, I do not know how far my plea went and although in my mind you deserved it, we would not have been able to stop people from saying that you got the award because I was a manager at Sunday Observer and that I would have influenced the panel.

Statistics fade away, but insinuations move from generation to generation.”

I was more interested in the new way of life I was approaching as a budding Army Officer, I told him I had no issue with it and to forget about it.  Surprisingly, I was not upset about it and was glad that my friend Anura de Silva received the coveted award.

My father said,” there would come a time when your son’s friends will tell him that you became the Schoolboy Cricketer only because his grandfather pulled for him.” We laughed over the matter and continued with our shopping after lunch.

So many years later, thinking back, I agree with what my father did although he had taken an exceedingly rare stand. I still do not know whether my father’s appeal to his chairman was successful.

Neither do I know whether the panel had a selection criterion where Anura deserved the award despite me having the better statistics and post-school records in captaining Colombo North Schools and Ceylon Schools and also playing for the Board President’s XI against the Hyderabad Blues and scoring 40 runs.

This was one of the greatest lessons I learned from my father.

As for Anura de Silva who passed away a few years ago,  had earned my greatest admiration and respect as a cricketer.  He was great on the field.  He was complete.