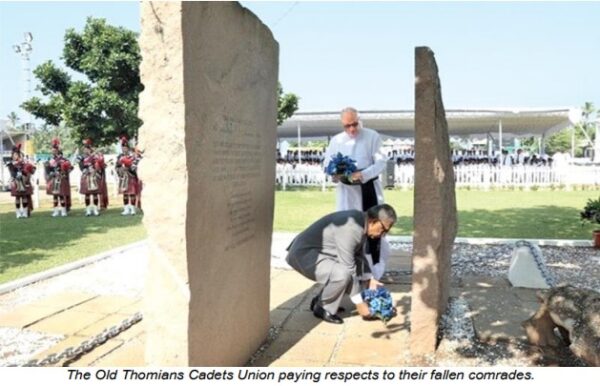 Semper Fidelis – “Always faithful” or “Always loyal” is actually the motto of the US Marine Corps. This is a Latin
term used by others as well, for the same purpose. For a military man, it means much. The term instills positive
self-esteem, sense of belonging, pride and confidence. In a way, Esto Perpetua or “Be Thou for Ever” gives a
similar feeling to a Thomian.

Thomians go to War
March 27, 1918. Ablainzeville – Mayannaville, France. A defence line of the British during World War 1. This period was also known as the spring offensive. All was not quiet, as some thought. There was heavy fighting, with the Germans trying to take control over British positions. A young lad, leading from front was in the thick of battle. Back in Ceylon, many of his friends were in their classes, at the school by the sea, in Mount Lavinia. As the day progressed, there was so much moaning, groaning and gnashing of teeth at the front lines. When sun went down, wounded severely, in pain, the first Thomian made the supreme sacrifice. The sacrifice for Queen and Country, the annals of Thomian history was recorded with pride and honour. Amidst tears, anguish and sorrow for the family.

Horsfall – The first to fall

Second Lt Basil Arthur Horsfall, fell as a true Thomian, hundred years ago, paving the way for many others to follow him. As a little boy, I remember reading the names of these Thomians, listed on a board in the College
Hall. He was awarded the Victoria Cross posthumously. The highest and most prestigious award for gallantry in
the face of the enemy, which can be awarded to British and Commonwealth Forces.

His Commanding Officer, Lt Col Rickman later wrote to Basil’s father, “He being wounded severely (in the head)
at the time, hearing that the two other platoon commanders on the ridge were both killed and the other platoon
commander wounded, he refused to leave his men. Throughout the day, a very heavy fight was continued. Twice
your son lost his position but each time he counterattacked, driving the enemy back. He held his ground though
his Company had lost 135 out of 180 engaged. In the evening, when both my flanks were driven in on to my headquarters, I sent written instructions to your son to retire on to the line of Ayette. He received the instructions

and carried them out, himself remaining behind to supervise the retirement. During the retirement he was
unfortunately killed close to the ridge which he had so gallantly held for two days. His body had to be left where
he fell, and the ridge has been in the possession of the Germans ever since. By his splendid example and devotion
to duty undoubtedly a very critical situation was saved.”
A story that swells the heart with a mixture of emotion and pride.
Over 80 young Thomians, died in action or went missing during World War 1. There is no accurate record of how
many joined the armed forces during this time. There is also no record to tell how many joined during World War 2 and how many got killed, wounded and went missing.

13 lucky for some – history repeats

February 13, 1985, Kokilai Army detachment. North East coast, a sleepy seasonal fishing hamlet in Sri Lanka. In
similar vein, another young Thomian entered not just into the annals of Thomian history, but into Sri Lankan
history too. The evening was happy with tea, laughter, chatter and play. Dusk gave no clue of an impending
danger or threat that loomed. The night was gentle, warm and humid with not much wind and noise. A night
that was going to be long and hard, though.

It was soon going to be cruel to those who were in this little isolated detachment. The stillness of the night was
eventually broken by a lightning attack by the LTTE, the first of its kind. LT Shantha Wijesinghe commanding two
platoons, led and fought against almost 150 terrorists throughout the night to cause heavy losses to them and
saved his men and himself from being annihilated. He had no reinforcements immediately, no casualty
evacuation or support. The easiest option for him was to retreat, to live another day to fight.

Shantha chose the harder one, to fight and die. Probably the first time the LTTE used RPGs when the Army did
not even have them. He was one of the first soldiers to be awarded a gallantry medal, Rana Sura Padakkama,
during the LTTE armed conflict. Although he lived to tell the tale, he died whilst fighting, on May 29, 1987, during
Operation Vadamarachchi. He was awarded Weera Wikrama Vibushana posthumously, the third-highest medal
for gallantry.

His Commanding Officer, Lt Colonel Vijaya Wimalaratne, himself a decorated soldier, was to write a citation
following his death, “Major Wijesinghe had a record of being one of the bravest officers in the Army since his
extraordinary defeat of the terrorist attack on the Kokilai Army camp. He was in the forefront of almost every
major action undertaken by the Rapid Deployment Force (RDF) and IGR. His actions are almost legendary. His
tragic death was a great loss to our Army. Major Wijesinghe displayed gallantry, courage and conspicuous bravery
of an exceptional order throughout the campaign, in the face of the enemy. He acted instinctively and voluntarily

with no regard to the risk of life and personal security, with the aim of safeguarding the lives of his comrades and
facilitating the operational aim of his force.”
Marvellous feats, which not only make a normal man’s eyes moist, but raises the hair of the daring and bold.
Many Thomians went down the same road as Basil and Shantha in almost the same manner, in recent times and
before. Telling us, at the going down of the sun and in its rising, to remember them. Thomians, solemnly paid
tribute to these valiant men on March 27, 2018. This tribute has now become a hallowed tradition and custom
of Thomians young and old.
Many and all who gave their lives are heroes. Each and every one of them. But then, there are a few whose
stories have made them become legends. Acts that deserve to be shared and told over and over again. Sadly,
they cannot be, for many reasons. The men, their blood and their stories hug and nourish the soil where they lay
silent. It is only the sweetness of their breath that gives life to the flag, that tells us the story. For Thomians, the
above will stand tall always and will be the story of others as well.

Men who chose to serve in the armed forces and police have a lot to think before making the decision to join.
Especially back then. During our time, options were very limited, if you were not going to be a professional. The
good and comfortable life of a company executive or a planter was the obvious choice. To be in the forces, meant
firstly, to be away from home and loved ones. Secondly, to be men of steel who would have to go through the
harshest conditions, freezing cold or scorching sun. Thirdly, to be prepared to be awake while the nation slept,
devoted and brave. Fourthly, to be prepared to pay the ultimate price. A battle situation could range from being
generous to horrible. A situation where it would, for an ordinary human, be too terrifying to think of anything
else but getting out alive. In other words, to help your comrade who has fallen in pain or leave him and get out
yourself.
The Thomian legacy of soldiering (meaning serving in the armed forces and police) may have been due to the
fact that most of the men who joined the forces did cadeting. War comics, battleships and bombers too may
have inspired some. It was never considered an attractive sport or activity, though. So it was only a few who
were daring and courageous who took to this sport cum activity. Although there was no glamour and colour, the
rewards were very useful life skills and leadership qualities. During our time, the master in charge, a mentor to
many, used to always say, when the cadets were on camp, College discipline was very good and there was peace.
Wonder whether it is still so. S Thomas’ College, Mount Lavinia has produced men who commanded the three
services and police at different times.
Thomians have also been in the forefront raising some of the most specialised units in the Army, Navy and Air
Force. Now, for the first time, we have the Secretary of Defence who was also a cadet. We are thankful to all of
them.
Today, we have what is known as the Old Thomians Cadets Union which is just about four years old. With very
humble beginnings, it has now grown in size and stature, over a few years. Its incumbent goal is to promote
cadeting in College, support and help its growth. This in turn will help to carry forward the great Thomian legacy
of soldiering. We would also like this activity to transcend beyond its immediate goal. As a spillover, we are
confident that this nation of ours will have men of honour, courage and leadership, walking past the great granite
Memorial, which is so rich in class, character and appeal. Young Thomians as they walk out of the gates, will then
remember the lesser sung verse of the College song.
“When into the world we go
For our life’s career
As the call of duty sounds
We will answer clear”