The cries of birds filled the morning air as we followed a narrow tarred road through a banana cultivation. On hearing our approach, a hawk eagle atop a tree flew into the thick vegetation and a small animal which we couldn’t identify slithered across the road and in to the bush.

We were in Mahagama, a farming hamlet in Suriyawewa that lies in the boundary of two districts, Hambantota and Moneragala. The ancient Mahagama Wewa was situated here, against the backdrop of the lush greenery of the banana cultivation. Villagers now call it Mahagama Wewa because it lies in the village of Mahagama in Suriyawewa. In the past, it had been known as UrusitaWewa. 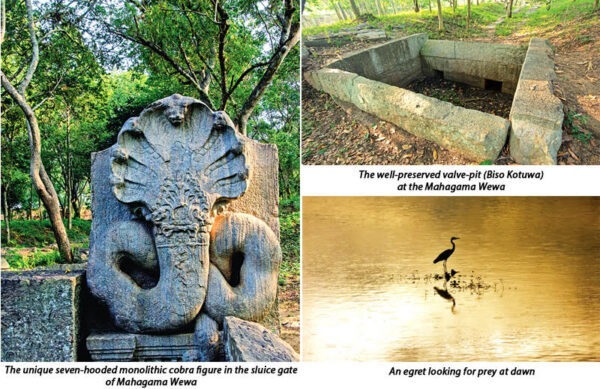 My first visit to this area was in 2000. I came across this beautiful Mahagama Wewa while travelling to Migahajadura in the northern part of Hambantota. Those days, driving along the same route, I encountered muddy roads full of potholes and houses made of wattle and daub on either side.

Recently, we re-visited the area and found that it had been given a new lease of life under the mega road development program of the Hambantota Port and Mattala Rajapaksa International Airport (MRIA) at Mattala. All the highways and main and secondary roads in the area have been widened and carpeted. The mud houses have been replaced by modern brick and cement houses. The lifestyle and livelihood of the villagers have definitely changed.

In ancient times, achievements in hydraulic engineering reached the heights of advancement during the Rajarata civilisation, and in the deep south of Magama in the Tissamaharama area. The main achievement of this civilisation was advances in hydraulic engineering which the Sinhala engineers applied heavily in construction technologies during this period.

Mahagama Wewa is important from the point of view of the ancient hydraulic civilisation of the Sinhala people and their marvelous irrigation works in ancient Sri Lanka, where cobras, or nagas, were also considered to be water spirits. Cobra engraving were heavily found in guard stones.

Mahagama Wewa is one of the places where the ancient valve-pit (Bisokotuwa) is still preserved; it also has a sluice gate. A unique monolithic figure of a cobra (Naga) with seven hoods with a ribbon knotted around its neck can be seen near the sluice gate of the Wewa. It’s a piece of expert stone carving, rich in great stone workmanship, and cannot be found anywhere else in Sri Lanka.

Archaeologists firmly believe the seven headed cobra (naga) is a mythical King Cobra guarding water bodies and places of sacred devotions. This unique monolithic figure of a cobra with seven-hoods and a well-preserved Biso-Kotuwa of Mahagama Wewa is an example of expert stone carving, rich in workmanship, not found anywhere else in Sri Lanka and very important monument which reflects the ancient hydraulic engineering heritage in in Sri Lanka.

Earlier, there had been two cobra figures, but there is only one now. The other is believed to have been thrown into the Wewa. The remaining figure and valve-pit are well preserved and are maintained by the Mahaweli Authority of the Walawe region.

Mahagama Wewa is believed to have been built in the Magama period in Ruhuna by King Mahanaga of Ruhuna Kingdom. Although we cannot ascertain more facts about the history of Wewa, an interesting legend is assorted with the name of the tank.

It seems, a man had been found living among wild boars in the royal park at Magama of King Mahanaga who ruled Ruhuna. The man was rescued and brought up to the King who ordered officials to give him human food and later he was able to speak. The King had ordered the officials to train him to get used to humans.

Later, under the King’s guidance the ‘pig man’ known as, ‘Urusitana,’ who built the tank called Urusita Wewa. Before long Urusitana became a ruler of the area and thousands of villagers became his subjects. Owning this cleverness, the whole province became self-sufficient.

As time passed, the King became jealous of Urusitana. He destroyed Urusita Wewa. Urusitana became mad and committed suicide, by jumping into the tank. Having heard that, his wife too committed suicide in the same manner. The Mahagama Wewa was thus ruined and the paddy fields destroyed. According to legend, this is how the name of Urusita Wewa came into being.

Urusita Wewa originally covered an area of over 700 acres, but siltation has led to its shrinking to about 400 acres. In the morning, Urusita Wewa presents a breath taking view. Dead trees provided nestling ground for various birds such as, pelicans, egrets, painted storks, spoonbills, eagles and cormorants.

Freshwater fishing provides an ample income for the fisher folk and food to the villagers. A small fish market is conducted in the morning near the tank where the fishing community of Mahagama Wewa gathers to sell their fresh harvest. It is also an ideal place for bird-watching enthusiasts and photographers.

Apart from that, hundreds of farmers in the Walawa Basin have benefited from the waters of Mahagama Wewa to cultivate paddy, banana and other crops under the Mahaweli Authority of the Walawa region.