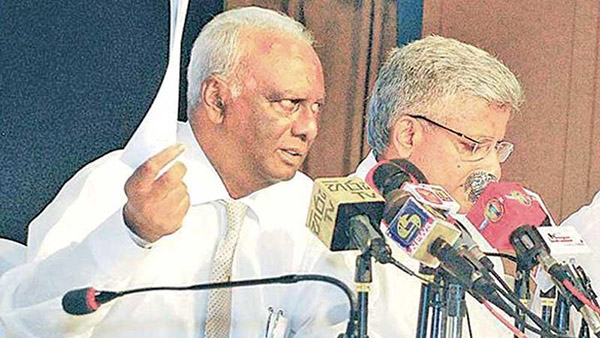 Flashback: Jayantha Dharmadasa holds up a document for the media to see while accusing his rivals of corruption and financial malpractice in the run-up to the election of office bearers in 2018 flanked by Nishantha Ranatunga. He lost the election but is now embedded with the very people he accused of destroying the administration of cricket

While the emphasis has been on slashing the earnings of an under-performing Sri Lanka team and the appointment of a Cricket Committee to clean up an infested set-up, the sport’s shadowy behind-the-scene office bearers responsible for the bog down have got away Scot-free and possibly having the last laugh.

The latest chapter in the episode projects the cricketers as fall guys or scapegoats while officials running the establishment who have been a law unto themselves and held every card that brought about the team’s downfall, have received the green light to further carry on with impunity.

Outsiders who have been following the rot taking place over the past year now despise that the creation of the government sponsored Cricket Committee to function alongside the Executive Committee of Sri Lanka Cricket serves no purpose and a waste of precious time.

“I don’t think this is the solution. The only solution is an Interim Committee and not a Cricket Committee that must be in place before anything, even an election”, said K Mathivanan whom many including his opponents see as a clean administrator.

He was the only candidate elected from the Opposition camp as vice president in 2018 but was forced out in the absence of transparency and his place taken by businessman Jayantha Dharmadasa who is now happily perched with the very people he branded as corrupt in what has now come to be seen as the single most baffling and mysterious crossover that ever took place at Sri Lanka Cricket.

While charging that the situation can only worsen without the right formula, Mathivanan said any hopes cricket followers have for a clean administration running cricket have only gone with the wind as the Cricket Committee will have no say in governance and financial matters.

There are other former administrators who argue that in the current set up the Executive Committee of Sri Lanka Cricket which has the power dispense funds can pull in one direction and the Cricket Committee can sway towards another meaning both parties will be treading different paths.

Jayawardena when he was less influential or powerless declined an invitation to play a part at Sri Lanka Cricket (SLC) saying he had no interest in teaming up with an organisation without any structure or direction.

His failure now to push for an ouster of the current set of administrators at SLC given the government clout he now holds is a mystery according to analysts.