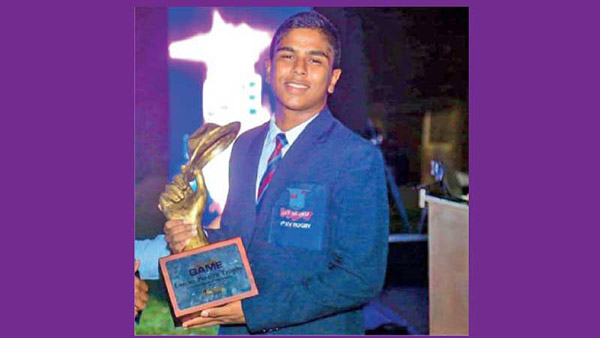 M. Makarim, is a former St. Anthony’s College rugby player, and was the captain in 2019; he was in the 2018 side in which year they were awarded school rugby’s inaugural Spirit of the Game Award, the Lorenz Pereira Trophy, which was presented to the Most Disciplined School team that upheld the spirit of the game in 2018. Mohamed Makarim was a talented fly half, the year he led the team His deputy was . Lashan Mahindrarathne with the veteran,Ronnie Ibrahim as the Head Coach of the outfit.

He joined St. Anthony’s College grade 6 English medium class in 2011 and left in 2019., he started his schooling at Green Wood international school in Matale He was one of the best players of the under 12 team .The constant encouragement of his parents mother-Thanuja Haleemdeen and,Father- Mohamed Fiyaz, and the school St Anthony’s College gave him the platform to convert all his energy into something positive through sports which taught him the importance of education and the role it plays in building a person’s character to become a prefect, which includes discipline, and the importance of being ambitious. He started focussing on academics along side sports and passed the Ordinary level exam obtaining seven A s and two Bs

With the momentum gained from the ordinary levels, he concentrated on his advanced levels right from the beginning while taking part in sports . He obtained the best result in the commerce stream of StAnthony’s College in 2019 having 4 A passes with a Z score of 1.9165 while being the 46th in the Kandy District and the 756th in the island in the Advanced Level examination He is currently pursuing A bachelor’s degree at the Memorial university of Newfoundland, Canada.

He was a rugby fan since childhood watching his cousins Ishrath Singalaxana(2006) and Shahim Singalaxana (2013) playing for Trinity College and took up to the game as he joined the Katugastota school in 2011.He started playing for the under 12 team coached by Sanjaya Amunugama, and was the vice-captain of the team in that year and went on to become the under 12 best player in the all island rugby tournament in 2011 and the team emerged champions He was a member of the under 14 rugby team in the year 2012 and was the vice-captain of the under 14 rugby team under coach Sanjaya Amunugama and the team emerged plate champions in the 2013 all island 7’s tournament. He was the vice-captain of the under 16 rugby team which emerged champions under the guidance of Deepal Punyawardana in the under 16 Central Province and all-island rugby tournament in the year 2015 beating arch rivals Trinity College three times in the same year and scored the winning try in the finals against Science College and, was called up to play for the senior side in the year 2015 at the age of 15 due to his exceptional performances on the field while he was representing the under 16 rugby team.