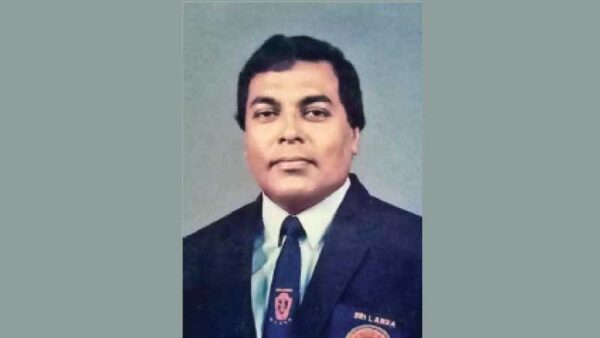 Annesley Mendis the veteran sports administrator has held several top posts in the Sri Lanka Softball. Federation . A man of vast experience in softball cricket having being involved in the game since 1981 was a founder member of the Softball Governing Body.

An old boy of St Mary’s College Dehiwela he has been the softball coach of Girls High School Mt Lavinia, St Josephs College Nugegoda and Kalubowila MV since 1985. In addition he was the former Secretary of the Federation, former Chairman of the selection committee and also one time National coach of the Sri Lanka soft ball team. He also did a superb job to promote Gampaha district women’s cricket as chief organizer and coach of the Gampaha Distract Women’s Softball Association . He initiated women’s cricket in Sri Lanka and started a cricket tournament with a challenge trophy presented in his name . He was the Manager of the first ever soft ball cricket team to play a tournament abroad . Mendis also one time Vice President of the Kurunegala District women’s cricket and also the Secretary of the Softball cricket umpires Association . His aim was to promote softball cricket especially among the ladies and his service in various capacities at soft ball cricket field gave more exposure to this sport . In 1990 Annesley Mendis got a chance to tour India for a successful meeting with Indian softball officials to conduct an International tournament .

In 2006 Annesley Mendis was appointed as Secretary of the Asian Softball Federation and also was invited as chief Guest at the 19th Indian National Softball Championship .He is presently not well and is staying at home but his great effort to promote softballl cricket always is highly appreciated by the all softball officials as well as the players.