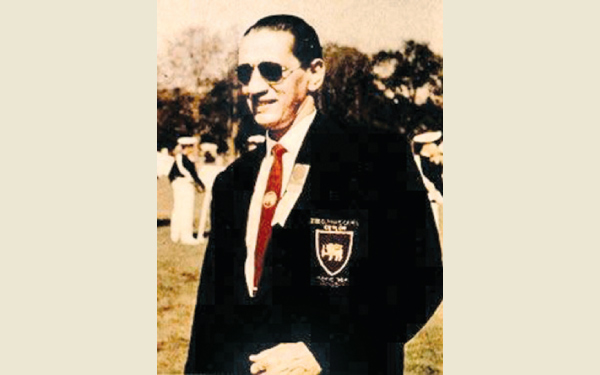 Edward Ian Gray, better known as Eddie Gray, who participated at the 1948 London Olympic Games began his sports career at the tender age of 10 years.

He had the opportunity of participating at the National Boxing Championships in 1930 while still as a schoolboy while losing to Ganegoda in the quarter-finals. Eddie Gray was also the captain of the Royal College Athletics Team in 1936 and showed his prowess while competing in the one mile, ¼ mile and in the pole vault events.

He also went on to captain the Royal College Rugby Team in 1937 and was later awarded school colours in boxing, athletics and rugby. Eddie Gray was also a member of the Royal College Rifle Rangers Team which clinched the Governor’s Cup.

Thereafter, he joined the Police as a Sub-Inspector in 1939 and immediately he was able to shine when he won his bout at the Burma-Ceylon Boxing Meet.

In 1940, he went on to annex the National Boxing Championship while competing in the lightweight class category and won the Manning Cup in 1941 presented to the Most Scientific Boxer.

In both these competitions, Eddie Gray had to battle it out with another reputed boxer of Olympic fame, Alex Obeysekera. Eddie Gray also displayed a great amount of consistency in his success and won the lightweight class events at the Layton Cup in 1941, 1944, 1946, 1947 and 1949.

He went on to win the Clifford Cup in 1944 and won his bout at the Madras-Sri Lanka Boxing Championships. Eddie, who later became popular as the ‘Boxing Flame’ was selected to compete at the 1948 London Olympic Games following a series of selection trials.

In fact, during these trials he had the opportunity of defeating some of the more reputed boxers in the calibre of F. C. de Niese and Ivan Bevan who had earlier participated at the Empire Games in 1938.

At the Olympic Games, Eddie Gray overcame A. Petriyana of Czechoslovakia during his first-round competition. However, he went down to E. H. Howard of Canada in the quarter-final bout.

After returning from the Olympic Games, Eddie Gray continued his outstanding form and qualified for the 1949 National Boxing finals while defeating Ivan Bevan. He never looked back from there onwards and defeated Ron Wilmer in the final which was considered a turning point in his career.

He then retired from the ring after having participated at the 1950 Empire Games in Auckland.

Eddie Gray later became a top boxing coach and an International Boxing Judge and was also able to win colours while turning out for the CR and FC Rugby Team in 1950 and 1951.

He also rendered yeoman service to uplift boxing in Sri Lanka while serving as the Secretary and President of the Ceylon Boxing Association during the period from 1958 to 1970.

Under his supervision, Sri Lanka were able to compete in boxing events in Pakistan, Thailand, Singapore and South Korea while several other nations visited Sri Lanka to participate in tournaments.

In fact, Eddie Gray was instrumental in organising the third Asian Boxing Meet in Colombo in 1967. He also served as a judge at the 1966 Asian Boxing Meet and in 1968 he was selected as a member of the Boxing Jury for the 1968 Mexico Olympics.

He was also presented with a special medal for his services at this Olympic Games. Eddie Gray had the honour of holding office as Secretary of the NOC during the period from 1970 to 1973 and was the Manager of the Sri Lankan contingent for the 1964 Tokyo Olympics.

He was virtually an encyclopaedia in boxing but unfortunately, he left the island to settle down in Australia. No doubt his emigration to Australia was a huge loss to Sri Lanka in the field of boxing.

He was a Special Invitee for the Centenary Olympic Games in Atlanta 1996 and four years later, he came to assist the Sri Lanka contingent for the Sydney Olympics. (C.D)