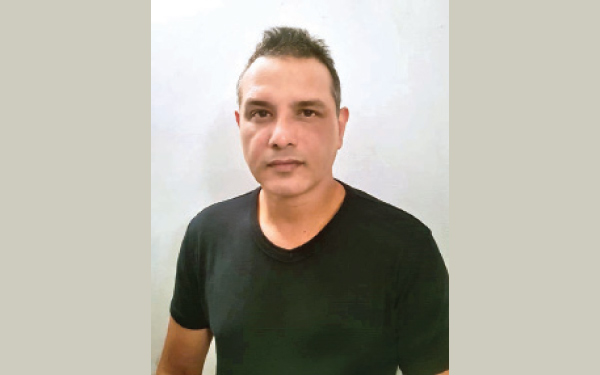 A player to engage in a position in the ‘Pack’ which in other words is defined as a forward in a rugby team should be well built and strong enough to handle the pressure especially in attack and defence Alfred Hensman was a midget but a vigorous player who played as a flanker from his childhood at school, club and later for the National team with distinction binding in the third row handling the oval shaped ball.

Alfred Hensman was born in1971 to devoting parents Anthony and Therese Hensman. He is the youngest of three brothers. The eldest Vicky is into trading along with Alfred and his father while Jerome is into business while the sister Marina Candappa is an English Teacher.

Vicky attended Mahanama College while Jerome managed to gain admission to Royal College, Colombo which enabled Alfred to secure a place at Royal College in 1976. Even though he was renowned for rugby skills, Alfred started playing football and was picked to play in the College under-15 team.

Later one day, one of his uncles Andrew Pereira took him to watch a rugby match held at Police Park between Havelock Sports Club and Police Sports Club team. After observing such an enthusiastic sport, he got motivated and decided to start playing rugby. Since he was so eager to play rugby, he enrolled his name to play in the college junior rugby team and was selected to play for the last game of the season. With this involvement, he continued to play rugby for under-15, and went on to captain the under-18 team. He later played for the under-19 team when he was merely 16 years old. Winning the Triple Championship in 1988 under the captaincy of Lasitha Guneratne and under the watchful eyes of coach Dr. Fred Perera was one of the many highlights in his career.

His distinguished school rugby career guided him to annex the Sports Colours and the ‘Royal Crown’ which turned out to be an unforgettable achievement in his life. He toured Bangkok with Sri Lanka under 19 team un 1990. He finally left school in 1990 and decided to continue his career in handling the oval shaped ball. To continue his skills in rugby and gain more exposure, he decided to don the CR and FC jersey. This enabled him to play top competitive rugby for his club and to represent Sri Lanka in both Sevens and XV-a-side rugby.

While maturing as a profound player at CR later they entrusted him with the role of captaincy in 1997. Under his captaincy they clinched several championships especially in Sevens as well as being runners up of the League. After almost over a decade of competitive rugby he finally decided to hang his boots in 2000, until when he was a great lover of the sport. Since then he still has the passion for playing rugby and decided to share his talent and experience by coaching his school which influenced immensely to mould him as a top ruggerite. The coaching career commenced from the Royal under-16 team when they won two All Island Championships. Also while he was coaching under-18 they won the ‘Simithriarachchi Trophy’ twice.

Due to the love and passion of the game, he is still continuing coaching while working alongside with his father in trading.

He represented the country in several tournaments which brought honour and fame to the country which included the Al Ain and Dubai sevens in United Arab Emirates in 1996, the Rugby Asiads in Taiwan 1996 and 1998 in Singapore. In 1997, the Hong Kong rugby sevens in Hong Kong and in several World Cup Qualifiers and Quadrangular Tournaments held in the Region involving the top rugby playing countries like Thailand, Malaysia and Singapore. He was also a member of the team which played against the Australian Northern Territory team in 1997. He donned the National jersey at the Asian Games and Commonwealth Games in 1998 while playing in the XV-a-side team which toured Australia in 1998 and the Singapore Sevens in the same year. He followed the IRB Level-1 course held in Sri Lanka in 2009 and 2010.

He is married to Viranthi Senaratne and blessed with two children Talia and Minoli who are schooling at Holy Family Convent Bambalapitiya. The eldest daughter Talia is currently a house captain and prefect and younger daughter showed her prowess in basketball for the school in under-15, 17 and 19 age categories. They were adjudged champions in all age groups both at All Island and National Schools tournament.

He was associated with some talented players in that era like Champika Nishantha,Viraj Prasanna, Harris Omar, Imthi Marikkar, Nishantha Bopearachchi, Shad Doole, Filitoga Lametta (Samoa captain), Michael Tala (Samoa player) along with his role model Lsitha Guneratne. He likes to extend his sincere gratitude to his coaches C.P. Abeygunawardena, Dr.Fred Perera, Dr. Maiya Gunasekara and Ana Sarnapala who played a key role in transforming him as a top rugby player.